Stars; Fiona Dourif, Brad Dourif, Danielle Bisutti, A Martinez
Director; Don Mancini
Running Time; 90 Mins
Chucky is back and this time he is unleashing murderous mayhem on a grieving dysfunctional family. The life of wheelchair bound Nica has been shattered following the death of her mother. The arrival of Nica's sister and her family stirs up old arguments and new ones about Nica's perceived inability to cope on her own. When each member is found horribly murdered she begins to suspect that the culprit might be the strange doll delivered a few days ago, one that seems to have itched itself to Nica's little niece.

Movie franchise, especially in horror with well known figures such as Jason and Freddy Kruger have become over-saturated to the point where no amount of tongue in cheek self mockery can possibly save them from public disdain. A principle problem is that at some the point those who originally conceived the characters jumped the creative liner long ago leaving their beloved creations in the hands of those who do not necessarily appreciate them. Somewhat unfairly, the Chucky series gets lumbered in with the likes of those iconic idols of splatterdom and terror in franchise hell, yet of all these the Chucky films have succeeded by going for quality over quantity. With the latest instalment, only the sixth in a series that has spanned twenty five years, writer/director (and Chucky creator) pulls out all the stops to deliver a fun filled ride of a movie that delivers on all fronts; dark humour, mild scares, and a strong script and properly fleshed out characters (pun intended). 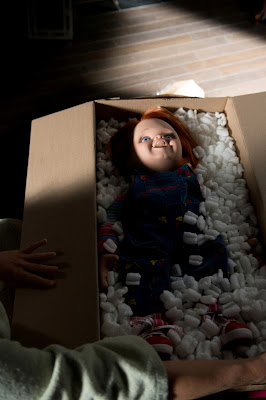 Manicini seems to have by-passed the events of the previous two films, Bride, and Seed of Chucky and reset this latest story decades after Child's Play 3. This was a wise move as although the addition of Tiffany and Glen added some new life to the series, continuing this twisted family saga could have added a bore  factor spelling disaster for Chucky fans. By removing them from the main story, Manicini gets back to having the kind of fun with everyone's favourite killer doll that made the first film such a success.

The plot, at its core is very straightforward setting the scene typical of most horror films, that of a decaying old house playing host to a grisly death that brings together a troubled grieving family. What Mancini's script does well is introduce brief elements that keep the story moving along setting up it for the big battle at the end. It is with the principle human characters however that Manicini has the most fun injecting some dark humour but capitalising on all the horror hallmarks.


In Nica (a strong performance by Fiona Dourif) Mancini has scripted a quintessential scary movie heroine, brave and resourceful though seemingly surrounded by those who think they know what is best for her. Nica's older sister Barb (Danielle Bisutti in fine comic form) provides intrigue and comic relief as a shallow snob, a victim of the current financial crisis ashamed of her husband working as a barista and devastated at the thought of her daughter going to public school. Her high pitched whispers echo her snobbery fears matched only by her green eyed observations of her husband's seemingly amorous focus on the family nanny. Manicini establishes a tense sibling rivalry masked by Barb's false smiles shattered by Nica's refusal to be treated as an invalid. This adds a little depth of characterisation and it is this interplay that provides some of the film's best dialogue.

Other players including the family priest (a rather one dimensional A Martinez) , Barb's husband Ian (Brennan Elliot) seems to float through the first half of the film all smiles and niceties but not for long, and Jill the nanny (Maitland McConnell) provides some moments of titillation. Alice (Summer Howell) is the typical "cute kid" in a sickly fashion juxtaposed brilliantly as she slowly echoes Chucky's maniacal influence leading to a sudden outburst laden with the occasional colourful metaphor. Nica is by far the strongest and multi-dimensional of the all the players which makes her journey through the story even more poignant. Yet the one the audiences flock to see is the most entertaining; the combination of the creepy animatronic Chucky doll with Brad Dourif's venomous yet hugely entertaining voice over creating an icon of horror that has stood the test of time.


The film is well paced and the sub plots in no way distract from the main story but keep the audience entertained as Chucky settles in before unleashing his own brand of mischievous homicide. It has the right blend of dark humour mixed in with grisly macabre which Mancini the director executes flawlessly. The stand out moment has to be the dinner table scene with spinning ceiling view shot as dinner is served and the players take their seat whilst the audience is left wondering which one gets the poisoned dish. It really is a clever piece of cinematography that is not only visually engaging but adds some tense comical anticipation.

If there is one aspect the film that leaves a question mark is the end, not so much from the characters point of view since their final journeys are satisfactorily resolved. On the one hand Mancini the writer seemed to have trouble closing the door on this chapter of the saga opting instead to cram in a number of alternative endings. However this also worked in keeping viewer engagement revealing one surprise after another for fans of the franchise. All in all though Curse of Chucky is an entertaining addition to the series with right blend of gruesomeness laced with laugh out loud dark humour succeeding in keeping the franchise fresh and audiences anticipating more where the others have failed.
at August 25, 2013