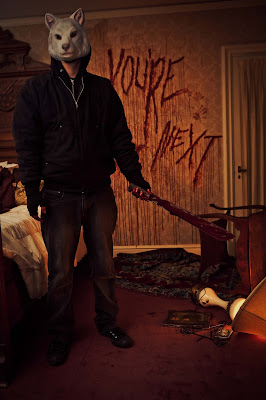 A family reunion to celebrate a wedding anniversary in a remote manor house turns into a bloody nightmare as a menacing masked figure traps the terrified group and begins picking them off one by one. The only person who stands in his way is a feisty family guest who puts her survival training to use protecting everyone in the house. Soon it becomes apparent the killer is not alone and the real fight for survival begins.

Although production finished on this project two years ago Adam Wingard's (A Horrible Way to Die, v/h/s) home invasion revenge picture is finally ready to grace the cinema screen. Packed with gruesome suspenseful action "You're Next" ticks all the boxes and adds a few of its own.


The film wastes no time getting the blood fest swinging into action. The opening scene features a masked machete wielding killer slaying his first victim then leaving the film's title scrolled in blood as a prophetic warning to the next victim. Although there is a brief pause as hosts Paul and Aubrey (Rob Moran and Barbara Crampton) await the arrival of their adult children and with respective significant others in tow, the attacks resume in full brutal force. Simon Barrett's sharp script however is more than just a series of killings by a random maniac with a gradual unfolding events revealing a twist or two in the tale. Barrett injects some dark humour smoothing off the edges of what is a dark and brutal film.

Director Adam Wingard maintains the suspense levels effectively with throwing in the occasional horror cliché. The clean editing switching from moments of calm into the full force of another attack keeps audiences glued to the screen and on the edge of their seats. This is helped by the cast performances conveying the right balance of grief and panic all  create a tense atmosphere. Shari Vinson, who has now left days in Aussie soap Home and Away far behind, throws herself into the role of the film's heroine Erin putting great gusto into the action yet never sacrificing any of the visceral elements.

Great performances from the cast as a whole and an enigmatic script add intrigue and emotional content to the film but this mainly about the bloody action The killer's penchant of machete and crossbow wielding (as well as one or two nasty little surprises) are over the top in comically brutal way fuelled by the family's attempts to defend themselves. Out come an assortment of flesh slicing weapons of choice including axes, kitchen knives and under Erin's almost military-eque direction, a series of booby traps which when guaranteed to bring tears to the eyes. It is brutal and bloody but outlandish enough to entertain."

You're Next is an above average slasher home invasion picture dark and bloody but with just enough macabre humour thrill and entertain audiences. It a solid platform for its female star as a viable female action lead, and cements the director and writer's reputation as a creative force in horror.
at August 25, 2013