Stars; Jeff Bridges, Ryan Reynolds, Kevin Bacon, Mary-Louise Parker
Director Robert Schwentke
Running Time; 120 mins
Recently and untimely deceased Detective Nick Walker is given an opportunity to serve the R.I.P.D (Rest in Peace Department), an afterlife enforcement agency tasked with capturing souls looking to evade judgment. Partnered with grisly veteran Sheriff Roy Pulsifier, Walker soon realises that his death in the line of duty is linked to a plot to build an ancient staff that will bring about the end of the world. The two are caught up in a race against time to find the artefacts before it's too late.

If the premise of R.I.P.D sounds a bit like Ghostbusters meets Men In Black it would be due to the number similarities the movie bears to its counterparts. It is hard to not think of Men in Black when you see the R.I.P.D precinct or Reynolds and Bridges chasing down souls using their somewhat out of this world weaponry. Even Mary-Louise Parker as the department's supervisor Proctor has the gruffness of Rip Torn's Z, whilst the supernatural apocalypse and spectral hunting draws influence from Bill Murray et al's 1984 blockbuster. Yet such comparisons are disingenuous as despite some shortcomings R.I.P.D is  an entertaining picture in its own right. 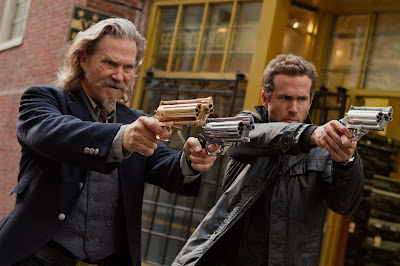 The word across the great oceanic divide has been that R.I.P.D was a flop of gigantic proportions which is why Universal apparently kept it hidden away until its US release. From the terrible acting (what even Bridges?) to the poor special effects, expectations from the Fright Fest crowd were low but on the whole it was a pleasant surprise that the film was not as bad as believed. R.I.P.D is not without its flaws. The emotional elements of the film, mainly Reynolds' undead detective trying to cope with his demise, lacked a little depth. Whilst this is a lighthearted supernatural action romp, the film would have felt more complete with a little visceral element (see Heaven Can Wait for how this was done). Kevin Bacon, who knows how to give a truly villainous performance, sadly fails to deliver in his bad guy role as Reynolds' treacherous partner, so much so that any number of lesser known actors could have played the part (probably for less money).
Yet the biggest disappointment was the climactic battle to stop the unleashing of rotten souls bringing about the end of the world, which lacked that epic apocalyptic scale. The whole segment looked and felt like it was all taking place in a studio lot rather than city streets and lacked any sense of foreboding doom. With a budget of $130 million dollars, expectations for this finale were high on the visuals alone yet it was disappointing on all aspects and at times felt rushed.

The negatives aside however the film is not wanting for exciting (but not jaw dropping) special effects and the 3D version being of much superior quality of recent productions. The action, under the directorial helmsmanship of RED's Robert Schwentke, is impressive and fast paced. However the truly entertaining and saving grace aspect of the film are the central characters and a script that gives the two leads some truly entertaining (though excessive) comic moments. Although failing to deliver on the emotional content of his character's inability to let go (more to do with the script perhaps) Reynolds executes his trademark charm and deadpan delivery that often leaves filmgoers divided, and he does so with great timing. This plays off well with Bridges essentially reprising his True Grit performance but resembling Buffalo Bill and looks as if he is having fun with some of the film's best comical dialogue.

Overall R.I.P.D is a fun entertaining film that with low expectations will surprise and delight on many fronts. Fans of the Dark Horse comic upon which this is based might be hugely disappointed with how this has been adapted. It is evident to see why it draws comparisons to Ghostbusters and Men In Black which is hard to ignore, yet all comparisons aside, the film has a look and feel all of its own. Shame about the ending.
at August 27, 2013