Stars; Kate Shenton, Tam Smith, Ana Loco, Damien Lloyd-Davies, Charlyne Chiappone
Written and Directed by; Kate Shenton
WARNING!!!! If you have a sensitive constitution perhaps you should not read this review. 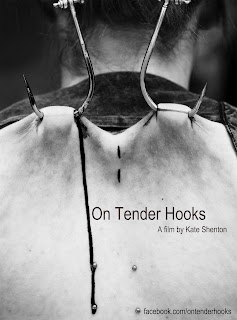 Fly on the wall documentary by a young filmmaker who spent a year following and talking to people who engage in human suspension, an activity that involves piercing themselves with hooks and suspending in mid air. Starting in London before moving onto Rio, Croatia, and Oslo in Norway, the film shines a light on the people and their reasoning behind as well as feelings about this mind blowing, innovating and largely misunderstood past time.


Body piercing, tattoos, and extreme body modifications always leave most people in a state of awe and disbelief - "why on earth would anybody do that to themselves?" and "they must have a screw loose" are typical reactions. Whilst these are tolerated within certain boundaries, human suspension is sure to be the limit to what many consider an acceptable practice. Yet Kate Shenton's frank and emotional documentary looks to cast an enlightening spotlight on the practice, its very strict safety protocols and the motivations of those who week after week keep coming back for more indulging in some outlandish displays which are jaw droppingly creative.
When you think of human suspension by meat hooks pierced through the skin attached to a custom made harness it is hard to imagine it involving anything other than just hanging in mid air and bearing the strain and pain that must surely accompany something so gruelling. However what Kate Shenton's film reveals are acts of suspension that defy conventional human imagination. Hooks penetrating various parts of the body with positions ranging from the lotus position to mid air splits, stationary suspension to acrobatic swings that would put to shame the most daredevilish of trapeze artists, the art of human suspension (and yes it is an art) provides a challenge for those who practice it as well as even the most hardened of onlookers.
The film also focuses, in shocking detail, the piercing techniques involved, including the different types of hooks used as well as the care and attention that goes into constructing the high tensity harness, rigorously tested and maintained for safety to ensure trust and well being of participants. What will challenge those who feel this is a highly dangerous (and done incorrectly it can be) and disturbing past time, is the care that goes into making sure the suspenders are "hooked" up. From the anatomical knowledge of the piercers to ensure no vital areas of the body are caught, to the very sanitary conditions of the work areas that would rival any operating theatre, for what is seemingly a very dangerous activity, safety and well being of suspenders is an absolutely priority. Some aspects, such as the hook piercing are not as painful as one might believe, and whilst some experience pain and discomfort, many under the endorphin and adrenaline rush, are swinging away like children from a climbing frame.
Where the documentary really excels is in capturing the stories of the people involved, and the sheer rush of joy suspenders get from an activity the mere thought of would have others squirming in their seats. The thought of suspending oneself from sharp meat hooks might seem painful yet watching these participants perform an array of mind boggling suspensions with nothing but smiles and laughter is guaranteed to challenge those perceptions. The suspenders themselves are colourful yet very happy and open minded individuals, even more well adjusted than perhaps "society" would like us to believe, after all what sane person would do this to themselves? It is this sort of preconceived notion of what is acceptable also reveals that some suspenders are vilified by their families and the legal system. The story of Ana who is currently fighting for legal custody of her child, is particularly heartbreaking, and during a Q&A afterwards Kate revealed that the majority of suspenders and piercers face similar harassment, and that this mostly targets women. 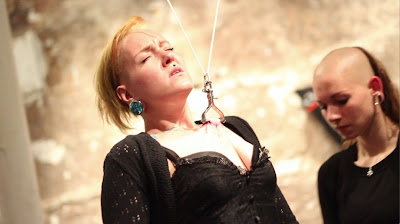 On Tender Hooks is a frank yet touching examination of a group of people who for a variety of reasons choose to take up human suspension from spiritual fulfilment to the endorphin-fuelled rush that challenges the limits of the human body and soul. By leaving the floor open for the subjects of the film to do most of the talking, and choosing largely to stay behind the camera Kate has captured the real sense of community amongst the suspenders. These are happy and content individuals who seek fulfilment through extreme yet very safe methods in a trusting environment, no different to say any form of extreme sports or physical activities such as mountain climbing or potholing. Kate's connection with the community not to mention a finale that reveals her taking research into a subject matter to new heights (pun intended) that have given her a unique understanding of it all, powerfully comes across in the film.
Human suspension, like anything else, is not for everyone and neither the filmmaker nor its practitioners are looking to convert more people to participate. On Tender Hooks however should leave everyone with a better understanding and appreciation for this bizarre practice and even a little fondness for these colourful individuals whose only wish is to be left to their own devices (again pun intended), free from judgement and vilification.
at September 01, 2013