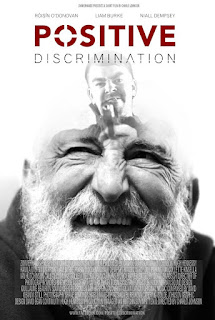 Joe is an elderly man, terminally ill but receives financial help support from a local volunteer group. Tanya is a student sitting her finally exams but resorts to prostitution to pay debts; and a policeman. Three seemingly unconnected lives soon come together in this tale that takes the idea all is not what it seems to new heights.

I was once told that perception is reality, how people see things shapes the world around us. What is perhaps more accurate is that people's thoughts shape how they see the world which doesn't necessarily equate with the reality. Case in point is this engaging short film from Irish writer/director Charlo Johnson who takes the viewer's perceptions and turns them every which way possible. Even the title is deceptive, politically evocative indicating an underlying message that at first appears to be absent from the story but reveals itself as the story unfolds.
The film itself is simplistic, very little actually happens with outcomes revealed slowly and subtly. Johnson is adept at atmospheric setting; there's the gloomy start where the mysterious Garda Detective is picking up a prostitute on the street corner. He then introduces Joe struggling through his day helped by the kindness of passing strangers. this changes to something more comfortable with the introduction of his seemingly pleasant innocuous relationship with Tanya. All that changes again when Johnson beckons the viewer to  look underneath the surface, and teases with many quick hints and flashbacks of the Joe's (Maghnús Foy) younger days. When certain unpleasant truths are revealed the viewer is forced  to reconsider their perceptions and perhaps even redress societal assumptions and prejudices. Much attention needs to be paid as the big reveal approaches providing just enough answers yet leaving more questions.

Overall "Positive Discrimination" is an engaging film packed with intrigue. It is professionally crafted with clean editing, and a real sense of place and atmosphere ably aided with a music score that changes along with the film's tone. All the actors are compelling in their roles, even Niall Dempsey as the Garda Detective who is only on screen for 90 seconds and has minimal lines comes across very strong. Liam Burke as Joe gives a multifaceted performance and Róisín O' Donovan brings kindness and vulnerability as Tanya. Johnson's clever script however is the star, a cerebral rollercoaster of misconception and deceit that will leave your head spinning long after the credits roll.
at February 15, 2016