Everyone's favourite debt collectors are back calling in dues and falling foul of a vicious mobster in the action thriller 'Payback'. Initially billed as 'Debt collectors' it reunites from the first film its stars Scott Adkins ('Accident man' and 'Ip Man 4') and Louis Mandylor ('The Quest' and 'Martial Law') with director Jesse V Johnson. Originally billed as 'Debt Collector 2' and then 'Debt Collectors', the film sees debt enforcers French and Sue back miraculously in yet another action packed adventure.

After their bloody and brutal near death experience, debt collectors French (Adkins) and Sue (Mandylor) heal up and get back to doing what they do best - cracking skulls and breaking bones - chasing down an assortment of lowlifes who owe money to their boss, Tommy (Vladimir Kulich, 'The Equalizer'), Vikings). They're latest assignment puts them in the sin city itself - Las Vegas -  to collect dues from a dirty casino owner, who turns out to be Sue's vicious ex lover.  Meanwhile, a notorious drug kingpin is hunting down French and Sue to avenge his brother’s death. With danger on all side the pair has no other choice but to fight their way out of an explosively dangerous situation 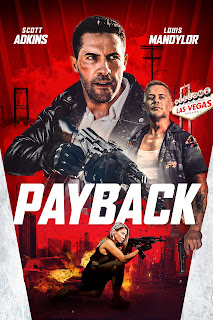 The first film, released in 2018, proved to be a huge hit and received a big screen outing at that year's Fighting Spirit Film Festival to a packed house. Fans and critics alike praised the performances of its two leads, their chemistry likened to that of Bruce Willis and Damon Wayans in 'The Last Boy Scout'. Scenes featuring cow being led in a cattle pen symbolising how humanity is no different to the cattle -' we a re all pieces of meat' and with a shared fatalistic outcome had some labelling 'the Debt Collector' as an art film. It was its mix of gritty violence and dark humour that cemented the reputation of the collaborative partnership of Adkins and director Jesse Johnson (having previously worked together on 'Savage Dogs' and the other big hit of the year 'Accident Man') and introduced Louis Mandylor into the fold.

The chemistry between the two leads created a buddy picture for the ages and the three would  work together again on the British gangster thriller 'Avengement' with Scott Adkins in a career best performance, released the following year. At the same time Johnson and Adkins' eagerly awaited 'Triple Threat' - the 'Expendables' of martial arts films - was finally released, Mandylor also worked with Johnson on the action thriller 'Legion Maxx' aka 'the Mercenary' starring Dominique Vandenberg. Now the three musketeers of independent action film are back in what promises to packed  with intense action, sharp dialogue laced with plenty of dark humour, though it is not certain whether the cows will be making an appearance.

'Payback' will be available on VOD from the 6th June and is available to pre-order on iTunes. It will get a DVD release on 6th July.