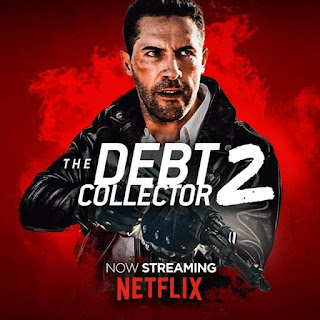 The collection partnership of former gym owner French (Adkins) and ex B-Movie actor Sue (Mandylor) are united for a collection assignment that sees the boys heading to Las Vegas to do a job for their old boss Tommy (Kulich). Along the way they have to collect from three marks in 24 hours however nothing is quite what it seems. A battle of survival ensues, one that'll test the very fabric of French and Sue's friendship as they realise the man behind the assignment is vicious gangster Molly X (Ski Carr) and he has a personal score to settle with boss Tommy and the two collectors.
REVIEW

Back with a vengeance are the elite action team of Adkins, Mandylor, Johnson, and Small  with a thoroughly entertaining action thriller balancing style and substance. Regular writing collaborators Jesse V Johnson and Stu Small score again delivering their usual mix of dark humour and action woven together with a gripping story which avoids the dreaded sequel pitfall of rehashing the first film. Unlike the first offering which had hints of art noir , 'Debt Collector 2' will resonate more as a modern day western. It develops the story from the first film with French and Sue entering a new chapter in their friendship, putting the repercussions of their brush with death at the film's core. An interesting twist in the characters introduces a new dynamic with seemingly reversed roles. French has become more cocksure and confident and is effectively leading the charge compared to Sue who is now more reflective of his life choices, seeking to clean up his act. This makes you sit up and take notice, eager to see where it leads as the friendship forged in gunfire and blood in the first film, is happily re-formed yet will be tested to the limit.

As director, Johnson elicits some incredible performances from leads Adkins and Mandylor showcasing their natural chemistry, reminiscent of the best of 80's and 90's cinematic buddy pairings strongly evoking Nolte and Murphy from '48 Hours'. Aided by Johnson and Small's quintessentially sharp very British script, Adkins and Mandylor show off their propensity for comedic delivery matched by strong performances bringing depth and realism to their characters - Adkins shows us his evolution as an actor since his career defining performance in 'Avengement'. He certainly seems to have fun with a more cocky version of French but shines in intense moments showing us a very angry character hardened by his brush with death.  Mandylor's heartfelt visceral performance where French recounts his experience in hospital is genuinely moving, showing the hallmarks of a veteran of both big and small screen.

'Debt Collector 2' has just the right balance of story and action - an in depth tale of two men's bond paired with pure escapism that moves at pace. The fight scenes choreographed by Luke La Fontaine literally pull no punches packed with bone crunching strikes and the free-flow of human tissue. La Fontaine has clearly opted once again for the no-frills hard hitting fighting style with some levity. On an entertainment level this works well with Johnson's modern day western complete with bar fight at the beginning, and a brutal boxing bout. Whilst much of the action is light in tone, the mood darkens later in the film. In particular French and Sue's eventual clash provides one of the film's hard hitting pivotal moments. Adkins is a veritable pro at martial arts action however Mandylor more than holds his own with a gritty street style. For the finale Johnson and the team keep the twist and turns coming for a climactic gun battle with all the blistering stylish action of Sam Peckinpah and the emotional roller-coaster reminiscent of John Woo's earlier heroic bloodshed classics.

'Debt Collector 2' is a quintessentially British comedy thriller packed with laughs, a heartfelt story and blistering gritty action, . The two leads are as watchable as ever, their chemistry infused charisma and impeccable delivery puts the duo at the top of cinema's greatest pairings, essential a buddy movie for the 21st century that's sure to endure. They are ably supported by some familiar and welcome faces including Marina Sirtis as Mal Reese - French's former lover, and Bennett himself - Vernon Wells from 'Commando' and 'Mad Max 2' fame as chop shop owner Cyrus Skinner. Jesse Johnson's influence of the best of Hollywood action is present and accounted with a real British twist, a veritable 90 minute action packed ride that hooks you in from the start and doesn't let go till the end.