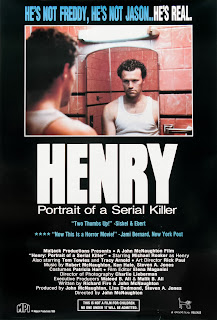 Henry is a self-employed pest exterminator, who after ridding homes and businesses of scurrying vermin, gets his kicks from nocturnal extermination of a different kind - choosing his innocent victims at random then killing them anywhere and anyway he can. His only companion is Otis (Tom Towles), an ex-convict on parole who washes cars at a local garage and indulges in selling drugs and flirting with young men. Sensing a kindred spirit in his housemate, Henry introduces Otis to the pleasure of killing brutally and spontaneously in a horrific scene involving the two men beating, stabbing and bludgeoning a television salesman who refused to serve them. Things get complicated with the arrival of Otis’ sister Becky escaping her violent husband and looking for a fresh life, and soon Becky and Henry fall in love much to Otis’ jealous laden chagrin.


The idea for the film came about when executive producers Malik B and Waleed B Ali hired John McNaughton - who at the time was working as delivery driver for their video equipment rental business - to direct a documentary about 1930 American gangsters. The film ‘Dealers in Death’ was a moderate success enough to spur on the Ali brothers to commission their young employee to make another film this time about Chicago's wrestling scene. However that film fell through and so the brothers gave McNaughton a $100,000 to make a horror film. McNaughton was inspired by a documentary about real life serial killer Henry Lee Lucas who claimed to have killed over 100 people between 1960 and 1983.


Steven A Jones was hired as producer and music composer, and he in turn hired Richard Fire to work on the script with McNaughton. Given the very low budget, friends and family of the crew were used for filming with some playing multiple walk-on roles, and all of them wore their own clothes.  Michael Rooker was reportedly working as a janitor at the time and auditioned in his work clothes. After winning the starring role, Rooker wore the same uniform throughout filming and stayed in character throughout the month long shoot.


McNaughton opted for shooting this like a documentary, but using static cameras slowly zooming in and out, adding a surreal voyeuristic quality to the viewing. To make it even more uncomfortable viewing McNaughton’s script dispenses with the fancy debonair dialogue and witticisms attributed to the most malign movie villains, and with no sub-plots or heroic law enforcement types coming to the rescue he audience have to endure horrific killings one after the other, without relief. Filming finished on time with barely anything left of it’s meagre budget but when McNaughton showed the film to his business partners they were less than impressed.


To say Malik and Waleed Ali were not impressed was perhaps an understatement. They had largely expected a slasher film but were presented instead with a darker more thoughtful film. They were so underwhelmed with the finished film they didn’t even consider it for a VHS release let alone a theatrical run. One of their employees - Chuck Parello saw the film’s potential and persuaded the brothers to let McNaughton screen it at the Chicago Film Festival. 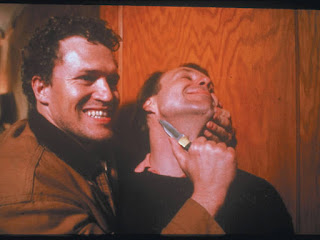 The film received mostly positive praise especially from Chicago Tribune writer Rick Kogan who described it as accomplished, arresting and haunting, Soon ‘Henry’ earned a reputation which followed it to the Telluride Film Festival where apparently half the audience were so disturbed and repulsed they walked out of the screen. It screened at Splatterfest Festival the following year, 1990 to a standing ovation. With critics praising it’s daring and whetting the appetites of horror fans, the film’s run in with the dreaded censors - the MPAA - would further delay a release.

When submitted to the MPAA ‘Henry’ received an X rating, one normally reserved for porn films back in the days when such films graced the cinema screen. An X rating for such film was usually the kiss of death and so a fight ensued to negotiate with the censors. John McNaughton asked them what he could change to receive an R rating to which he was told in no uncertain terms that no edits would change their minds. McNaughton decided on the spot not to challenge the rating, and instead moved for the film to be released unrated with a disclaimer for no one under 17 to be admitted to see it. The MPPA relented and the film was released generally in the US on 19th September 1990. It took a little longer for it to receive a UK release on the count of similar tussles with the British Board of Film Classification.


A Dark and Bloody Tale


The finished film is gratuitous movie making at its best (or worse) leaving little to the imagination. It makes for uncomfortable viewing from its chilling start, with scenes of murdered women ditched in fields and the sounds of their agonising screams as they struggle and plead for their lives, echoing in the background.


Henry is not for the light-hearted and may even unsettle viewers with a strong constitution or penchant for gore fest slasher flicks. It is not just the no holds barred murder scenes that result in a reflexive turning away of the head or squinting shut of the eyes. The performances from the film’s two male leads, whilst hardly OSCAR worthy, are chillingly real. Rooker and Towles clearly relished their gruesome roles with a ruthless combination of icy remorseless stares and evil grimaces.


Although the film was made in 1986 it wasn’t released until 1990 for fear of attracting the wrath of the censors at the height of the video nasty debate. Yet its release added further fuel to the roaring fire of the video censorship movement, and was banned from having a video release, most likely due to such horrifying moments like the scene where Henry and Otis are watching a video recording of themselves brutalising a family in their home, raping the women and then slowly killing each one as the others look on terrified knowing that their fate would be the same,


Banning the film may have seemed like an overreaction although given its unnerving nature, somewhat understandable. However such was the uproar over its release and censorship that the nuance of the film seemed to have been missed by all except a few critics. McNaughton cleverly tapped into the macabre curiosity and voyeuristic nature of the audience making them accomplices to the crimes they witnessed.


In a further bizarre moment, McNaughton, using the scene where Henry and Otis enjoy their murderous recording, makes the unsettling implication that those watching violence unfold for entertainment may well be as guilty as those committing the acts. This may not have sat well with some audiences including the censors hence a further reason for it being denied a video release

The Renaissance of Grindhouse


It is ironic that such a film that found itself the victim of censorship and outrage, is now commonplace in cinemas as well as readily available for home viewing. The recent resurgence of what used to be called “video nasties'  are now affectionately termed ‘Grindhouse’. Films such as ‘Hostel’, ‘Wolf Creek’, and of course the ‘Saw’ movies continue to shock and terrify audiences and which leave Henry seeming tame by comparison.


Henry became John McNaughton’s only memorable and somewhat noteworthy work. His follow up ‘Mad Dog and Glory’ kept audiences away whilst the 1998 thriller ‘Wild Things’ was talked about for all the wrong reasons, mainly the threesome sex scene midway and co-star Neve Campbell’s no nudity clause in her contract. Those in front of the camera, particularly the males fared better with Towles having lined up a never ending stream of television work before returning to the genre in gore meister Rob Zombie’s ‘House of 1000 Corpses’ and its sequel ‘The Devil’s Rejects’ and also the remake of Halloween. Michael Rooker is more recognisable to cinema goers in major studio productions with big name stars including Mississippi Burning (Gene Hackman), Days of Thunder (Tom Cruise) and Cliffhanger (Sylvester Stallone).


‘Henry Portrait of a Serial Killer’ is McNaughton’s stunning film to date and does seem tame compared to the slew of its compatriots gracing the silver or plasma screens today. Yet it does contain strong (stomach turning) memorable moments, with cold hard performances from Michael Rooker and Tom Towles elevating the violence to a whole new chilling level. An inevitable sequel followed written and directed by Chuck Parello but made little impact. McNaughton's cult hit remains a lasting legacy to unrelenting realistic horror slashing the fantasy villains that reside in our dreams or rise from the dead, and reminding us monsters are real and wear a human face.