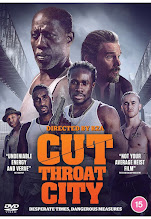 Hip hop music legend and filmmaker RZA has once again steps behind the camera for the psychological crime thriller 'Cut Throat City'. Hailed by The Washington Post as a 'film noir for the graffiti and graphic novel age' RZA's latest directorial feature is a heist film set against the backdrop of one America's environmental catastrophes, and is coming to the UK courtesy of Dazzler Media. This marks RZA's third film as director after his breakthrough Kung-Fu Flick 'The Man with the Iron Fists' followed by the heartfelt drama 'Love Beats Rhymes'. '

Turning to a local gangster for employment, the crew is hired to pull off a daring casino heist, right in the heart of the city. The film boasts a stellar line - up  includes Miles Morales himself, Shameik Moore from 'Spiderman Into the Spider-verse' along with Kat Graham ('The Vampire Diaries'), veteran action legend Wesley Snipes ('New Jack City', 'Jungle Fever'), Terrence Howard ('Empire')  Eiza González ('Bloodshot', 'Hobbs & Shaw') and Ethan Hawke ('Training Day').

'Cut Throat City' will be available to buy on DVD from 8 February, and you can pre-order your copy now through Amazon.