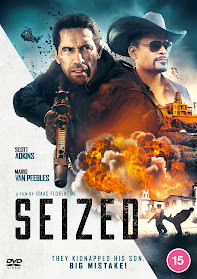 Nero (Scott Adkins), a former special forces agent has retired and moved to a quiet beach town to work as a consultant and rebuild his relationship with his son. He is awakened by a phone call and message from a mysterious voice (Mario van Peebles) telling him his son has been kidnapped and to save him. Nero is under instructions to wipe out three dangerous crime syndicates and leave no survivors. However Nero must work alone and faces growing obstacles as he fights to complete his mission, while uncovering the identity of the man behind the macabre plot. The clock is ticking and Nero can't waste any time or make mistakes, or he’ll lose his son forever.

After cutting his teeth in more meatier dramatic roles in 'The Debt Collector' films and 'Avengement', British actor Scott Adkins returns to pure entertainment action fare. The reuniting with Israeli director Isaac Florentine ('Undisputed 2 and 3', 'Ninja', 'Ninja: Shadow of A Tear' 'Close Range') builds anticipation for a thrilling ride which meets expectations and does not disappoint. Richard Dowry's well paced script offers nothing knew in terms of storyline borrowing from films like 'Taken' to include a retired deadly black ops agent who has a tense relationship with his child - in this case Nero's son Taylor (Matthew Garbacz). Even the film's title borrows from it's Neeson inspired source.  These are not bad things, far from it as these plot points are present so Nero can basically call on his deadly skills and get to work. 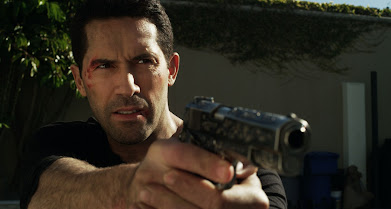 Scott as always is highly watchable and his mere presence now as an action genre veteran gives the film an epic feel. The ease with which he tackles the role and the explosive, kick ass action shows fans just how much he has evolved as an actor and consummate professional in every respect.  The welcome casting of Mario Van Peebles as cartel kingpin Mzamo is the only other thespian delight, who never fails to be watchable in any role he takes - check out Asylum fare 'American Warships' as proof. It's almost a shame he is regulated mostly to talking on the phone and giving a pep talk to his men but fans need only to wait until the film's climax for more Mario in action.

Still, as one of the action genre's more interesting and multidimensional villains he dominates every scene with all the ease and professionalism you would expect from such a veteran. The edited interplay does serve to build for the inevitable showdown and when the two finally meet this is where the real chemistry of both actors comes to the fore, with some effective contrast in characters. Scott as Nero is bloodied, battered where is Mzamo remains steadfast and cocky even when it seems things might not be going his way. The meeting of these two provides the films most engaging moments outside of the action. 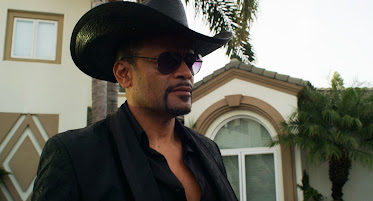 Since this is a straight up action movie, fans will enjoy the blood and bullets exploding throughout the film. Scott's films are rarely, if at all, PG-13 fare and anyone who has seen his recent work with Jesse V Johnson can testify. Here is no exception though the violence is significantly less brutal yet still packs a punch. Fight co-ordinator Art Camacho and stunt co-ordinator Larnell Stovell have retained some bloody and bone crunching fight action with 80s style shoot outs. Scott as Nero goes to work gunning down Mexican street gangs in a restaurant before moving onto a night club owned by racketeer Machado. These scenes are packed full of crowd pleasing blood drenched action, intense shootouts and inventive fights, one particular moment where Nero uses a broken plate like a ginsu knife. 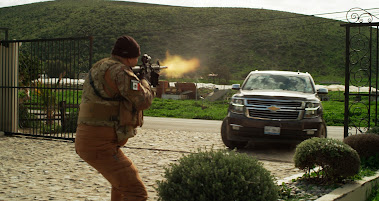 Much of the action is intense, frenetic, and well executed with full credit given to Camacho and Stovell. Yet they lack that much needed sense of danger with Nero proving not only 'hard to kill' but practically impossible to kill. That changes when he reaches people trafficker Omar's hacienda where not only the pace changes but so does the intensity with a now hand tied Nero putting his kicking skills to use.  The climatic battle at Mzamo's compound disappoint only insofar as the fights could have been longer with considerably more 'red coats' to fight upping the danger factor. What there is however is first rate with Van Peebles now getting in on the action and having a go with some fisticuffs of his own. One is definitely left wanting more action but overall the mix of shootouts and standoffs hit all the crowd pleasing buttons for a satisfying showdown.

'Seized' is pure entertainment action cinema at its finest with Scott dipping his toes back into the kind of film that launched his career. Though not quite as heavy hitting as more recent work, it retains a little gritty-ness in its criminal underworld setting and the bone crunching explosive action. Isaac Florentine keeps things moving at the right pace, whilst stunt and fight co-ordinators Larnell Stovell and Art Comacho set up explosive action sequences riddled with  shoot outs and bone crunchingly brutal fight action. Scott as always is highly watchable whilst Mario Van Peebles chews up the scenery as the villainous puppet master pulling Nero's strings. It is A film that remains entertaining on with repeated viewing and an open ending it that leaves you wanting more from both Nero and Mzamo. Until that happens grab your popcorn, switch off the brain and enjoy 90 minutes of explosive action delivered by the genre's exceptional craftsmen.