Celebrating The best of Bristol Film with Year Long Event

Local NGO 'Bristol UNESCO City of Film' is planning a year long festival celebrating the city's major role as a pioneer of film and the moving image. The event, #BristolFilm2021, was announced yesterday with plans for activities showcasing the many ways over the last century and a half Bristol has contributed to the world of film in both technical innovation and as a home to creative talents. It also marks the centenary of the death of the city's colourful pioneers in the field of moving image William Fries-Green. 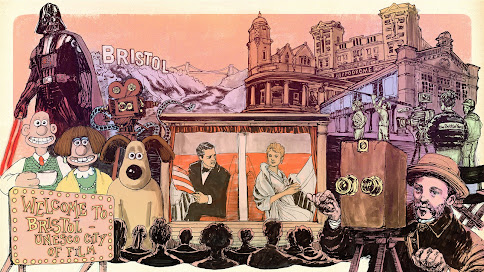 WHY IS BRISTOL A CITY OF FILM In 2017 the UN organisation UNESCO (United Nations Education, Scientific and Cultural Organisation) designated Bristol as a city of film, along with 18 other world cities that include Rome, Sarajevo, Sydney, and Yamagata. It also became a member of the UNESCO Creative Cities Network (UCCN) which boats a membership of over 245 cities around the world. Being a member enables Bristol to collaborate with member cities on a variety of cultural creative projects and through artistic exchange programmes shared ideas and skills with other creatives. Here ten top reasons why Bristol is truly the city of film. PROGRAMME OF ACTIVITIES 'Bristol Film 2021' promises to mark the end of lock down and the opening up of cinemas in the city with a packed programme of activities backed by local organisations Bristol Film Office, The Bottle Yard Studios, Cary Comes Home, Bristol Photo Festival, Watershed, Destination Bristol, Bristol Libraries, Encounters, South West Silents and many more. The activities will include walking tours exploring the city's cinema buildings, talks and panel discussions, and film screenings throughout the city. This year will also see the launch of a special publication featuring the public's memories of the cinema over the past seventy years.

"What better way to mark the achievements of Bristol’s film and moving image sector today than by shining the spotlight on a pioneer of the past who devised ground-breaking developments in motion picture technology. The ripples of Friese-Green’s work were felt by the film industry in the UK and across the globe. With projects like the CAMERA Innovation Motion Capture Studio at The Bottle Yard now opening up possibilities of mo-cap technology to businesses, Bristol continues to break new ground today." - Natalie Moore, Bristol City of Film

No date has been set due to the pandemic but hopes are held that the government's road map out of lockdown will see cinemas and exhibition halls in the UK open by the summer. For more information visit the Bristol City of Film website, or find them on social media;