Michael Moore's 'Bowling for Columbine' Free to Watch on YouTube

Controversial documentarian and activist Michael Moore has released his award winning documentary 'Bowling for Columbine' on YouTube, and everyone can watch it for free. Announced via social media on Wednesday 24th March in the wake of two US shootings within a week of each other, one in Atlanta Georgia and the second in Boulder, Colorado killing a total of 18 people.

"Sadly, every bit as timely as when we made it. We had provocative ideas about America’s gun violence and how we might reduce it. But it would require us all doing some very “un-American” things"

Throughout his career as a writer, television personality, journalist, activist and film maker Michael Moore has never shied away from controversy and nor speaking truth to power. His work is almost always aimed at shinning spotlight on the establishment including General Motors in the film 'Roger and Me', President George W Bush in 'Fahrenheit 9/11' and capitalism in 'Capitalism; A Love Story.' However it is 'Bowling for Columbine' that remains his most shocking, controversial and memorable for its no nonsense examination of America's fascination with guns in the wake of the 1999 Columbine High School Massacre. Released in 2002, Moore looks at every facet surrounding gun ownership, and gun culture as well as the general cultural and commercial aspects of guns and their impact on society. The film is both funny and shocking, with its most famous scene being his interview with actor Charlton Heston which proved to be the ultimate eye opener. 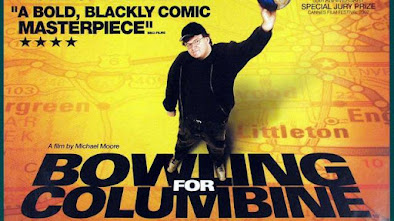 The film premiered at the Cannes Film Festival in May 2002 and opened to rave reviews. Praise was heaped on Moore for his tough thought provoking analysis of America's love affair with guns and for those looking for more gun control it's biggest advocate. Whilst many praised Moore's film it angered the National Rifle Association (NRA) and many right wing pundits who, when Moore won the Best Documentary feature OSCAR (and made his famous speech), demanded it be taken back for what they perceived to be his dishonesty that should've excluded him form being nominated.

Moore held on to his OSCAR and the film continued to be praised and awarded. Almost twenty years later the issue of gun control is still heavily debated and unresolved, with more mass shootings each year. With 'Bowling for Columbine' now available, unedited and uncensored, people can decide for themselves how relevant the film is today.