If like so many Kung-Fu film enthusiasts you were saddened at the end of 2019's 'Ip Man 4 The Final Fight' fear not as more stories are to come of Wing Chun's legendary master. 'Ip Man Kung-Fu master' sees Yu-Hang To reprise the title role under the direction of Liming Li with a script co-written by Li with Shi Chingshui. The film also features veteran Hong Kong action star  Wong man-tak better known to fans as Michael Wong. Like 2010's 'The Legend is Born - Ip Man', the film follows the life of Ip Man as a young man prior to the events of Wilson Yip's quadrilogy starring Donnie Yen.
Man is a police officer in his hometown of Foshan and soon to be a father for the first time. On top of that he must deal with Qing Chuan (Yuan Li Ruoxin), the dangerous daughter of a ruthless but honourable mobster killed in mysterious circumstances while in custody at the police station. More trouble looms when the Japanese army  in Guangdong province. 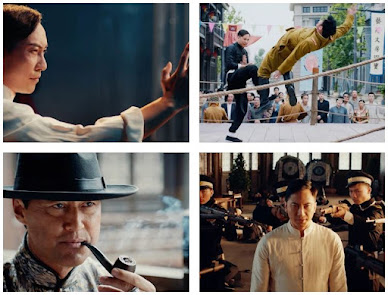 The 'Ip Man' films are known for their fabulous cinematography, historical settings and of course world class martial arts action - for this latest instalment comes courtesy of action director Sun Fei ('Kung-Fu Angels' - 2014, 'Kung-Fu Leader' - 2018). The film will be available on DVD, Blu-ray, and Digital VOD from 19th April courtesy of Dazzler Media. Be sure to pre-order your copy today.