Sheep Without a Shepherd Screening at Chinese Cinema Season 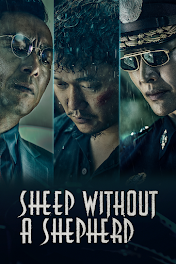 Trinity Cine Asia, one of the leading distributions of Asian films present a special virtual screening of the Chinese crime drama 'Sheep Without a Shepherd' as part of its 'Chinese Cinema Season' film festival. This three month online event, produced by Trinity Cine Asia in partnership with Filming East Festival and UK-China Film Collab, is dedicated to showcasing the best of Chinese cinema with over 50 films to be screened along with exclusive Q&As and discussion panels. As part of the line up 'Sheep Without a Shepherd' will be screened on 12th April and stars Xiao Yang, and features internationally acclaimed actress Joan Chen ('The Last Emperor, 'Marco polo).

Li (Xiao Yang) and his wife A Yu (Tan Zhuo, 'The Bravest') run a small business in Thailand and enjoy a happy home life with their two daughters.

When their eldest daughter is violently assaulted, blackmailed and left traumatised by another student, her parents intervene with a deadly outcome.  To save protect their daughter and avoid getting caught by the authorities the parent bury the boys body to cover up the accident.  However, the missing boy’s parents, detective La Wen (Joan Chen) and mayoral candidate Du Peng (Philip Keung, Blind Detective) push the local police to find the truth, and will stop at nothing until their missing son is found.

'Sheep Without a Shepherd' is the remarkable directorial debut from Malaysian filmmaker Sam Quah, and is a remake of Indian filmmaker Jeethu Joseph's box office hit of 2013. It boasts critically acclaimed incredible performances from its stellar cast and a tense and emotionally riveting story, making it a must-see and compelling new thriller with the Financial Times describing it as “Equal parts folktale and internet-age morality yarn”. Tickets are available through virtual cinemas - Rio Cinema, Genesis Cinema, HOME Manchester, Chapter, Showroom Workstation, Kinokulture - the Chinese Cinema Season website and will be available on digital platforms from 26th April. You can pre-order your copy today through Apple iTunes.