Japanese action star Tak Sakaguchi, who stunned audiences in 2017 with the critically acclaimed jaw dropping action blood-fest 'Re:Born' scored a double whammy with a film that lived up to its title. Released as 'Crazy Samurai Musashi' Tak takes on the role of the legendary swordsman and philosopher Miyomoto Musahsi in an insanely bloody non stop life or death battle. Thanks to Dazzler Media, 'Crazy Samurai; 400 vs 1' makes its way to UK home entertainment so that you can enjoy 91 minutes of slice and dice action and marvel in the world's longest one take action sequence in a feature film.

The Yoshioka clan is preparing for a duel against the famed swordsman Miyamoto Musashi, following the death of their master. With literally hundreds of members of their clan waiting to pounce on their enemy Musashi surprises his attackers, arriving out of nowhere. From hereon in it’s all-out war with Musashi facing off against the tidal waves of attackers headed towards home, with only his skill with the katana standing in their way. 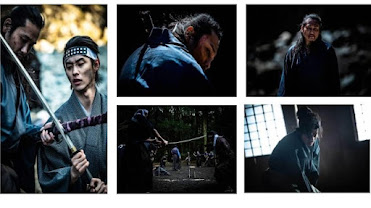 Acclaimed director and action coordinator Yûji Shimomura ('The Warrior's Way' 'Death Trance') helms Tak one again into a bloodlust action frenzy with a film that was essentially 10 years in the making. The 77 minute one-shot battle was actually filmed in 2011. It was a gruelling experience during which Tak broke his back teeth, ribs, and index finger. This led Tak taking retirement for a time until Shimomura, along with executive producer Ota Takayuki, bought the rights to the footage from the production company. The result is a thrilling slice of action cinema and a must-see for genre fans.

'Crazy Samurai; 400 vs 1' will be available on Blu-ray, DVD & Digital from 5th July courtesy of Dazzler Media. You can pre-order your copy through Amazon now and don't miss out on the non-stop (literally) sword action featuring Japan's legendary warrior.