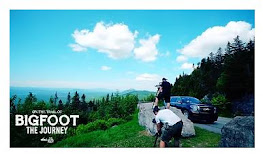 It seems the fascination with the world's most famous mythical Apex predator has far from dissipated but grown with each passing year. Whether you know it as 'Sasquatch' or 'Bigfoot' the need to prove his existence is so strong many have taken up the mantle including film maker Seth Breedlove. Through his film company 'Small Town Monsters'  Seth first documented this search in the mini-series 'On the Trail of Bigfoot' which continues with his latest release 'On The Trail of Bigfoot; The Journey' out on VOD from 8th June.

'Small Town Monsters' is an independent film company established by Seth Breedlove to investigate and record paranormal goings on across the American continent. Whether it's legendary monsters, UFOs, or a spectral haunting Seth is on the scene with camera crew and fellow investigators in tow. The viewer appetite for proof that there are things that go bump in the night remains firm and during the pandemic Seth has whetted those appetites with 'Mark of the Bell Witch' and 'The Mothman Legacy'. The release of these films marked a very busy 2020 for the paranormal documentarian and 2021 will prove to be even more so with his latest release. 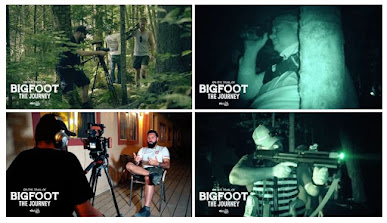 The latest film mixes monstrous mystery & human drama as Seth assembles a team of adventurers and investigators for the latest stage of the quest. 'On The Trail of Bigfoot; The Journey' sees Seth venture up the Adirondacks Mountains in upstate New York with Bigfoot researchers including Steve Kulls ("Monsterquest") and Paul Bartholomew ('Finding Bigfoot, Beast of Whitehall'). the crew spent an adventure-filled week searching for Sasquatch and documenting their journey on film. The Journey is directed and edited by Seth, who produced alongside Adrienne Breedlove, and features animations and illustrations by a host of incredible artists. The Journey also presents enough fascinating evidence to make even the most ardent skeptic take a second glance.

On the Trail of Bigfoot: The Journey will be available to purchase or rent on 8th June courtesy of  '1091 Pictures', and will be available  on various platforms including iTunes, Amazon Prime Video, Vudu and FandangoNOW. The journey continues.