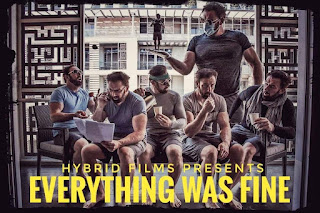 Glaswegian actor Bryan Larkin is best known as an action star in films such as 'London Has Fallen', 'Vengeance' and his critically acclaimed award winning 'Dead End Trilogy'. With his latest film Bryan takes a detour off the regular action film road to tackle a challenging role and topic; mental health. 'Everything was Fine' examines the torture and toll our mental health endures especially amidst the  global Covid19 pandemic, economic turmoil and the isolation of lockdown. The film aims to breakdown the stigma surrounding mental health, raising awareness through open dialogue, and also much needed funds for the 'Mental Health Foundation' charity.

The idea for the film came about in August 2020 during the Covid19 pandemic when Bryan Larkin travelled to Amman, Jordan to begin work on a film project. The rules of travel however dictated that upon arrival Bryan had to be tested and quarantined in a hotel for 14 days to ensure he was Covid free. Armed only with a camera, laptop, mobile phone and a questionable internet connection Bryan embarked on filming the story of a businessman in self isolation. The monotonous repetition of each day takes its toll on 'quarantine man' as the ruminating demons in his mind run amok hurtling him into the mouth of madness. It is essentially a no-holds barred sometimes comical but ultimately heart wrenching insight into the struggles of people who suffer with poor mental health. The title is based on those three words we often say; 'Everything is Fine' when deep inside it is not. 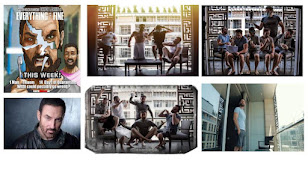 Over the next nine months Bryan and his partner Derek Newlands at Hybrid films put the film together with regular musical collaborator Joel S. Silver and a cast of familiar voices & faces of independent film. The film aims to open up a dialogue about the ongoing mental health challenges particular those brought by the fears and uncertainties of the global pandemic. Bryan is also raising money for the 'The Mental Health Foundation Charity' by making the film available to watch for free on YouTube as well as other platforms and asking viewers to make a donation. In the mission to tackle the daunting task of bringing the black dog to heel Bryan had this to say in a Facebook post;

"Let’s be clear, this past 18 months or so has thrown us all into unprecedented times and we are NOT all in the same boat. Many don’t have the luxuries of the wealth and fame. There’s many good people out there facing their demons alone. If you are one of them then I hope this film is a comfort to you. I hope it resonates. For the others, if all you get from it opens your heart just a little bit to give a stranger a smile then that’s good enough for me. You are not alone. It’s okay to not be okay sometimes."

'Everything Was Fine' is available free to watch on YouTube and make your donation by visiting the Hybrid Films website.