After more than a decade of silence, the walls of Bristol's once empty IMAX cinema will once again echo with the sounds of the whirring projector thanks to a new film festival. 'Forbidden Worlds' is the ideal film festival for hardcore cinephiles, founded by cinephiles, with a mutual love of genre film that changed the face of cinema. This weekend long event, to be held on 13th-15 May will showcase a selection of repertory fantasy, action, science-fiction and horror films from around the world celebrating the creative talents that made them. For its inaugural event 'Forbidden Worlds will not only be a gala of the best of obscure and classic genre films but also a birthday celebration for one of Bristol iconic institutions, 20th Century Flicks one of the few, possibly only, film rental stores still in business.

For me, being Bristolian born, and mostly bred, and a veritable film nerd Bristol holds a multitude of cinematic treasures. From its history in the early days of cinema as home to cine pioneer William Freece-Green to playing host to multiple film events and festivals ('Unchosen', 'Encounters Short Film Festival', and 'Bristol Bad Film Club' to name but a few), Bristol has been a nexus for all things cinema with a host of auditoriums to suit a variety of tastes from mainstream blockbusters to independent 'World' films. 'Forbidden Worlds' will add itself to that line up beckoning fellow film fans to Bristol IMAX Cinema which, aside from a few events run by the Bristol Aquarium, has been closed for over a decade. Opening in 2000 Bristol IMAX formed part of the 'At-Bristol Science Centre' (now known as 'We The Curious') and mostly screened a number of educational 3-D films including space walks, nature documentaries and also James Cameron's epic Titanic documentary 'Ghosts of the Abyss'. It also screened classic and contemporary blockbuster films. I had the pleasure of catching 'The Matrix', 'Batman Begins' and 'V for Vendetta' at the IMAX, which fired up my passion for new cinematic experiences, until it closed in April 2007 much to my chagrin. Its doors will open again to welcome festival goers for this weekend long celebration taking us back to the year 1982. 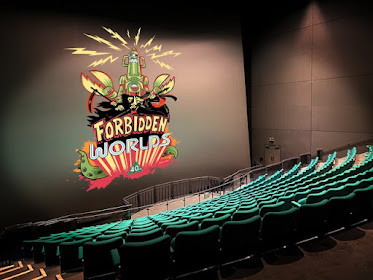 'Forbidden Worlds' was put together through a partnership of local and national businesses and non-profit organisations that include the British Film Institute (BFI), Bristol Aquarium, and Bristol Ideas (click here to see the full list of partners ). As part of the birthday celebration of the film rental store 20th Century Flicks, the festival will feature films from the year 1982, films that shook the cinema world and to this day are revered cult classics. 1982 was the year Ridley Scott showed us things you people wouldn't believe in sci-fi epic 'Bladerunner', which bombed at the box office but went on to become a classic. New York filmmaker Frank Henenlotter found infamy on the video shelf with his comic yet sickeningly grisly top shelf hit 'Basket Case', whilst Tobe Hooper and Steven Spielberg beckoned us into the light with their suburban supernatural tale 'Poltergeist'. During this time 20th Century Flicks opened their doors, first in Clifton then relocating to Bristol's landmark 'Christmas Steps', inviting customers basking in the video age looking for familiar and new titles that will thrill, excite, tickle the funny bone, touch the heart and terrify their souls. Over the years it has survived the transition from VHS to DVDs and thrived in the era of streaming services where other stores, including the multinational giant 'Blockbuster' have since withered away. Today it still offers rental of VHS and DVD titles as well as the opportunity to rent one of the their private cinemas. It's perseverance through challenging times for that particular industry has made 20th Century Flicks the city's icon and was the subject of this documentary by filmmaker Arthur Cauty.

Films that will be featured at the festival will include the aforementioned 'Blade Runner', 'Basket Case', and 'Poltergeist'. Alongside these familiar titles there will be a screening of John Frankenheimer's underrated martial arts action thriller 'The Challenge' starring Scott Glen and the legendary Toshiro Mifune, with fight choreography courtesy of a then unknown Steven Seagal. Mel Gibson will also burst onto the screen in his most famous role as the road warrior Max Rokatanski in the dystopian action thriller 'Mad Max 2'.  Younger viewers can enjoy Jim Henson's fantasy tale 'The Dark Crystal', and the animated classic 'The Secret of NIMH'. In keeping with celebratory mood 'Forbidden Worlds' will also screen Hammer's 'Dracula AD 1972' to mark what would have been Christopher Lee's 100th birthday. The whole weekend is packed with an assortment of genre titles, special presentations, and a secret late night title to be announced nearer the time. Click here for the full programme.

'Forbidden Worlds' is a weekend celebration of a groundbreaking year in film history; 40 years of exciting creative genre films still revered today, and a rental store that has seen it all and is still here to talk about it. The video store, as shown in curated documentaries 'In Search of Darkness' and 'In Search of the Last Action Heroes', changed the film industry platforming independent low budget films that would not have graced the silver screen. It therefore is fitting that 20th Century Flicks be the centre of this party not only for its longevity and icon status but the role it played in showcasing creative indie film talent and bringing the cinema to our living rooms.

Tickets are on sale now. For more information go to  https://www.forbiddenworldsfilmfestival.co.uk/.