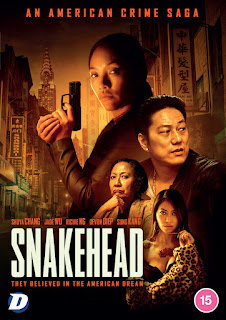 'Snakehead' is a story, inspired by real events, of a mother who will do whatever it takes to find her daughter, even join a metropolis' criminal underworld. After premiering in 'Discovery' section at the 2021 Toronto International Film Festival and a run in US and Australian cinemas this taut crime drama, rooted in today's issues of immigration comes to UK home entertainment courtesy of Dazzler Media.

Written, produced, and directed by documentary filmmaker Evan Jackson Leon 'Snakehead' features an impressive line up of action stars from that genre's prominent works. Shuya Chang ('Crouching Tiger, Hidden Dragon: Sword of Destiny') plays Sister Tse a woman in search of her lost daughter. With the help of a people smuggler known as a 'snakehead' Tse travels from Taiwan to New York's Chinatown. There she gains favour with Dai Mah (Jade Wu - 'Luke Cage') the matriarch of a crime family and quickly rises through the ranks. Also featured are Richie Ng ('Killerman'), Devon Diep ('Honest Thief') and Sung Kang (Han, 'Fast & Furious' franchise).

'Snakehead' is based loosely on the criminal empire of Cheng Chui Ping better known as Sister Ping, a notorious people smuggler. Following in her father's footsteps Ping was deemed by the US Justice Department as "one of the first, and ultimately most successful alien smugglers of all time." Ping's international smuggling ring known as Fuk Ching (Snakehead) operated from 1984 till 2000 trafficking thousands of people from China to the US. She was eventually tried and sentenced in 2005 to 35 years in prison. The idea for the film came to Evan Jackson Leon in 2007 after which he wrote a draft script. It wasn't until his documentary about NBA player Jeremy Lin - 'Linsanity'  - premiered at the 2013 Sundance Film Festival that he decided to pursue the project. Finance was raised through the crowdfunding platform Kickstarter, and once completed it premiered at the 2021 Toronto International Film Festival.

On its release the film was praised for its gritty realism and incredible performances; “Shuya Chang shines in a powerful performance” said Flickfeast whilst easternKicks hailed 'Snakehead' as “a moody crime indie echoing modern immigration issues”. Thanks to Dazzler Media 'Snakehead' will be available in the UK to own from 1st August on DVD and Download to Own. Pre-orders are available through Amazon now!