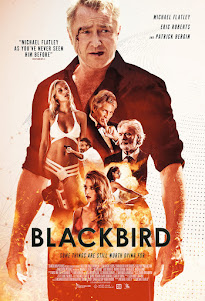 The most anticipated film of the last half decade has not been the latest Marvel project or the Fast and Furious franchise warp speeding into space. Instead it is an independent self funded spy thriller written, produced, directed by, and starring the Lord of the Dance himself Michael Flatley - well at least it should be. The mythos surrounding 'Blackbird' evolved over the last four years when it vanished from the scene almost as quickly as it arrived for its London Premier in 2018. After years of waiting 'Blackbird' is in flight making its way to a general release in Irish cinemas from 2nd September, and scuttlebutt in the film world is that it packs a few surprises and will raise eyebrows. As well as cinema going audiences in Ireland anyone in Bristol on the same day can attend a special screening arranged by notorious Bristol Bad Film Club at the former Bristol IMAX.  So where has this film, billed as Michael Flatley's magnum opus been all this time and will it be worth the wait?

When Michael Flatley hung up his dancing shoes in 2015 he set his sights on a burning ambition to follow the likes of Fred Astair to become a movie star. Flatley tested the waters with two short films - 'A Little Bit of a Tear' and the World War II set romance 'Till Forever' - before embarking on a feature film. The idea for 'Blackbird' evolved almost as soon as retirement started though according to an interview with Flatley in The Hollywood Reporter it was forming much longer than that;

"I think it’s something that has been bubbling around in my head for a long time. What do you do with grief? I love the contrast and to go as deep as you can."

The film centres on Victor Blackley a veteran secret operative who retires from the espionage life and moves to the Caribbean island of Barbados. Blackley wants to live the quite life, to enjoy his retirement and escape his past. The peace and quiet is interrupted when a powerful international arms dealer, Blake Molleneau (Eric Roberts), appears on the island and complicates his plans. As well as Flatley and Roberts going mano a mano the film also stars Patrick Bergin ('Patriot Games') and Nicole Evans ('Captain America; The First Avenger'). Filming took place in Ireland and Barbados in partnerships with various independent film companies; West One Entertainment (United Kingdom), Parachute Film Studios (Barbados), Egg Studios (Ireland) and Flatley's own production company Dancelord Pictures. Production was completed in time for its glitzy premier at the 2018 London Raindance Film Festival, but with journalists excluded and no social media reviews. Then just like that the film was pulled and was deemed lost with only some rumours that it was being privately screened at film festivals. 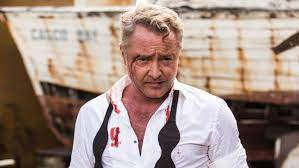 Out of the blue the Monaco Streaming Film Festival announced that 'Blackbird' would be opening the festival in July 2021. The chatter turned to and excited buzz only to be marred by technical difficulties which meant the film couldn't be streamed. Excitement maintained however when the festival awarded best actor to Michael Flatley. That was it, the curiosity of cinephiles intensified and with early word bite reviews being somewhat mixed, the most positive came from festival founder Tony Davies who told Variety;

"Michael Flatley’s debut feature film is such a pleasant surprise – he brings his renowned stage presence and energy, which we have all experienced over the past 25 years, to the big screen in a gripping romantic thriller."

Despite such glowing reviews there was still no word of a release date and anticipation of even a glance at any images, clips, or even behind the scenes gossip intensified. Then on 14th July Flatley dropped a first look trailer for 'Blackbird' and announced a release date for cinema screenings in Ireland.

On 2nd September Irish audiences will get to see Flatley's magnum opus on the big screen and the mythical curtain surrounding 'Blackbird will extent to the city of Bristol thanks to the Bristol Bad Film Club. The former Bristol IMAX - now home to the Forbidden Worlds Film Festival and Around the World with 20th Century Flicks - will also be screening the film and tickets are now available but selling fast. The Prince Charles Cinema in London has will also be screening the film. So what can we expect from the transition of the Lord of the Dance to seasoned superspy?

'Blackbird' has all the hallmarks of a vintage spy film that is less 'James Bond' more 'Casablanca'. Indications are a blend of romance, action, and exotic locations. It certainly looks good and Flatley looks great in his feature debut. The proof of the pudding however is very much in the eating and come 2nd September a cinema audience will get see Flatley in action to judge for themselves. Cine Bijou will be in attendance in Bristol and we aim to give your our full and honest review.