The Stratford East Picturehouse hosted the 7th annual Fighting Spirit Film Festival this September and it was the women who dominated. The festival's short film competition saw twenty films compete for the coveted Fighting Spirit awards, an event which saw female talents making their presence known. Female led stories, with women directors & writers behind the scenes roared so loudly it shook the walls of the picturehouse. The films of Gabriela Staniszewska ('Choose Your Weapon') and Kelsey Bollig ('Kickstart My Heart') took home many of the competition's top awards. These stories and many more that featured in this year's competition signalled the ever increasing influx of creative women making their presence known.
Women featured at the heart of so many of the short films in competition at the Fighting Spirit Film Festival. Director Alps Lifee's 'No Girls in the Dojo', is not only the story of a young girl training in martial arts to reclaim her family dojo but also a middle finger waived at the vile sexism still prevalent in society. The Audience Choice  (Sunday) Award winner 'Episode' sees Wei (Linda Louise Duan) battle a man prone to violence (triggered by his late wife's playlist). The fear of male on female violence is a threat of which women today are all too familiar. It's not only societal challenges that lie at the heart of women's stories. Tanja Ploner's documentary 'Fighting For A Living' features women stunt performers mixing it up with the boys, whilst 'Eva' and 'Super Ruby' show how women find inspiration in martial arts overcoming odds to pursue their passions and live a full life. It's no surprise then that in the competition's major awards women film makers cleaned up walking away with a number of well earned gongs. 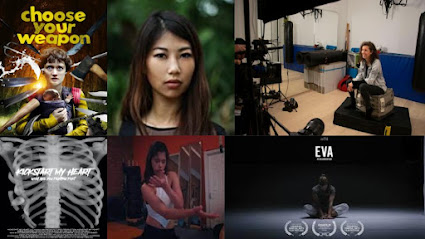 'Choose Your Weapon', written and directed by Gabriela Staniszewska, deals with a anxious new mother's (Cheryl Berniston) worst enemy - an anxiety ridden hyperactive imagination that turns a simple trip to the shops into a real life battle with the mind. With the help of a badass mum (Jadey Duffield) a way is shown to fight those fears with a weapon of your choice. The film is highly entertaining with some superb action and darkly bizarre humour that in no way trivialises the very real effects of crippling postpartum anxiety; in fact quite the opposite. It clearly resonated with the judging panel as 'Choose Your Weapon' won Best Film, Best British Film, and Best Audience Choice (Saturday).

What happens when all of a sudden you're the victim of a car accident and find yourself in the ultimate fight for your life? That's the story behind writer and director Kelsey Bollig's 'Kickstart My Heart'. For Lilly (Emma Pasarow) who whilst out on her daily run is struck by a speeding car. X-ray images of Lilly's broken bones accompanied by the nauseating crunching sounds, intersect the spiritual and mental battle she endures through 3 levels of hell. This surreal battle for survival is viscerally intense made even more so with the shocking revelation at the end (no spoilers). Lilly's fight is one that stays with you long after the credits role and why it was awarded Best International Short,  Best Director for Bollig's skilful direction, Pasarow's performance was recognised with a Best Actress award, and finally Best Cinematography.

When it comes to independent film, women are standing up, making their voices heard and letting their talent shine. The nominees and and winners of the Fighting Spirit Short Film Awards roared with pride with stories that entertained and inspired. The glass ceiling is well and truly shattered in the work of British Independent film.
at September 22, 2022