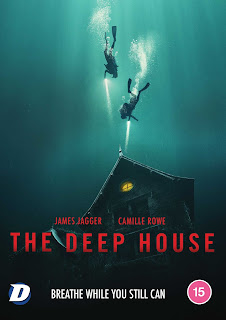 Writer/Director Alexndre Bustillo & Julien Maury
Starring  James Jagger, Camille Rowe,
Tina and Ben are YouTubers who travel to explore a house lost at the bottom of a lake, and share their experience on social media. What is initially a unique find turns into a nightmare when they learn that the house was once the scene of atrocious crimes. Trapped, with their oxygen reserves falling dangerously low, they soon discover they aren’t alone in the house.
Review

What do you get if take a haunted house tale and blend it with the claustrophobic underwater setting of 'The Abyss' or 'Sanctum'? The result is this taut supernatural thriller which, after a solid set up throws you in at the deep end and doesn't let you up for air.

Writers and directors Alexandre Bustillo and Julien Maury crafted a spooky script with the best elements of a classic ghost story adding a chilling Lovecraft-esque feel. With this genre however there is a 'we've seen this all before' factor that you have to get past. If you can do that what's revealed is a clever and genuinely unnerving ghost story that has all the tropes but with a fresh injection of life (ironically) and an art house feel.

Bustillo and Maury's script is packed with familiar features that cleverly avoids cliche. Ben and Tina are a likeable couple and here the writers avoid the cliche if making them too perfect. Ben's penchant for pranks proves to be a source of annoyance for Tina making this a very authentic relationship. Ben's obsession with making his fortune on YouTube add to the couple's frustrations. Avoiding the cutesy cliches like this add realism and likeability making the inevitable spooky encounter more tense. 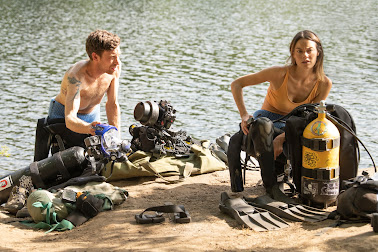 The scares come when the couple dive down to the submerged house through the writers knack of playing with viewer expectations. From the start you're not sure what exactly your watching - one minute you're getting the point of view (POV) from the couple's Go-Pro cameras so you're led to think this is a found footage film. It then switches to a conventional film then to the POV of Ben's underwater drone affectionately named Tom. This is a bold move as the constant switching can make it hard to follow yet Bustillo and Maury give enough time for us to see what's just enough of what unfolds before switching POV. Where most filmmakers like to use quick edits to keep viewers on the toes this is thankfully avoided. 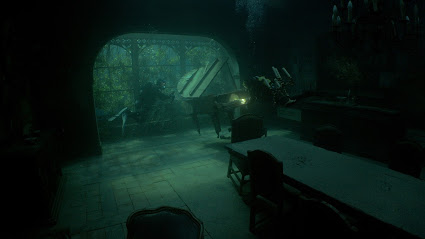 The film's strong points though are certainly its underwater setting and the filmmakers use this with maximum effect. Anyone who's endured the tension filled and breathless claustrophobic inducing underwater scenes in films like 'The Abyss' Sancutm, or 'The Deep' - especially the scene with Jacquiline Bissett's trapped arm - are sure to feel their chest tighten and breathing get more shallow as Ben and Tina explore the submerged house. The set piece itself, submerged in six feet of water, is of a higher quality one might expect from the budget of an independent film. Injecting new life into a classic horror sub genre is a challenge yet with solid performances from it's two leads, a seemingly anthropomorphic drone, and cuts between each POV woven the haunted house tale is given ironically a breath fresh air.

'The Deep House' is a supernatural tale with an aquatic twist that works well thanks to solid performances from its lead actors and chilling use of its underwater setting. The film is well paced, and balances insight and build up with scares that don't come thick and fast but are proportionately spread. When they do come they catch you off guard thanks to the superb camera work and constantly switching the POV from the Ben and Tina's mounted Go-Pro cameras to the audience viewpoint. Lots of teasing and tantalising with a claustrophobic setting that will leave you breathless and on edge.