[Trailer] - The Sleep Experiment gets US VOD Debut 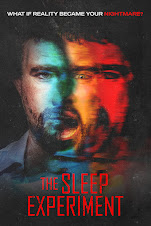 For his feature film debut Irish filmmaker John Farrelly tackles the claustrophobic and cognitive terror of human psychological experimentation.  'The Sleep Experiment' taps into the darkest recess of the mind to examine what humanity is capable of when pushed to the edge. Viewers in the US will soon get to find out when 'The Sleep Experiment' comes to VOD on 1st November courtesy of Red Water Entertainment.

Two detectives begin an investigation on the ethics involved in the top-secret research facility, Porton Down. One experiment, in particular, stands out to them as the most horrific, The Sleep Experiment, a scientific experiment that took place during the Cold War.

The experiment consisted of five prisoners, deemed Enemies of the State, being locked in a sealed gas chamber. An airborne stimulant was continually administered to keep the subjects awake for 30 consecutive days. The prisoners were falsely promised that they would be set free from the prison if they completed the experiment.

John Farrelly is one of Ireland's promising young film talents. For his short film 'Choice' John was named 'Ireland's Best Young Filmmaker', and soon after he resumed work on his feature debut 'The Sleep Experiment; which reportedly began production at secondary school. Much like 'The Stanford Prison Experiment, the film is based on alleged real events, namely the urban legend known as 'The Russian Sleep Experiment'. Though the story is considered something of a 'creepypasta' suggestions have been made the story is considered to be real and has certainly captured the imagination of other writers and filmmakers.

"I wanted to tell a story that explores what a human is capable of when pushed to the brink. I am fascinated by the human psyche and what drives a person do something that would be deemed inhumane. I wanted to show how an ordinary person can commit one of the worst crime imaginable, murder. When our primal needs are taken away from us, chaos occurs and the animal deep down inside us all is released."  - John Farrelly

Red Water Entertainment presents 'The Sleep Experiment' produced, edited, written, and directed by John Farrelly available in the US from 1st November on digital and cable platforms, including iTunes, Amazon, Google Play, iNDemand and DISH.